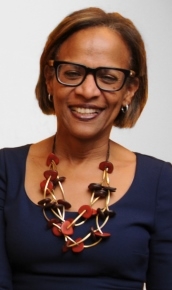 A national of The Bahamas, Ms. Therese Turner-Jones is the General Manager of the Country Department Caribbean Group (CCB), which oversees the Bank’s operations in Barbados, Guyana, Jamaica, Suriname, The Bahamas, and Trinidad and Tobago. While serving in this position, she will continue to carry out the functions of Country Representative for Jamaica.

Ms. Turner-Jones joined the IDB in 2013 as the Country Representative in Jamaica. She has over 20 years of experience in the areas of macroeconomics and economic development, with particular emphasis on the Caribbean. She has held key positions in the International Monetary Fund (IMF) including, most recently, as Deputy Division Chief for the Caribbean II Division, Western Hemisphere Department, and previously as Advisor to the Executive Director for Canada, Ireland, and the Caribbean. Previous to her work at the IMF, she was the Deputy Manager of the Research Department for the Central Bank of The Bahamas.

Ms. Turner-Jones’ vision is that the IDB will continue to strive to improve lives in the Caribbean by creating vibrant economies where people are safe, productive, and happy. She believes in deepening client relations and sees the interactions in the countries as being the heart of the IDB’s work. She has many interests outside of work, including family, women’s development, meditation and tennis.