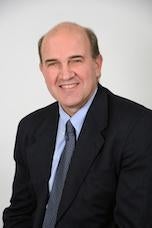 A citizen of Uruguay, Aguerre joined the IDB in 2003 as a transportation and infrastructure specialist, focusing on Central America, the Dominican Republic and Haiti.

Prior to his appointment at the IDB, he worked in both the private and public sectors in his native country, where he was chairman of the National Ports Administration, undersecretary of state in the Ministry of Transportation and Public Works, director of the National Roads Agency and chairman of the Institute of Transportation and Infrastructure Planning.

Aguerre holds a civil engineering degree from Uruguay’s Universidad de la República and a master of science in construction management, with honors, from the University of Reading, England.