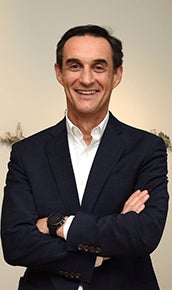 Federico Basañes is the Manager of the Knowledge, Innovation and Communication Sector, from which he promotes the generation and dissemination of knowledge and innovation to strengthen public and private sector capacities in Latin America and the Caribbean.

Between 2014 and 2018, Mr. Basañes served as manager of Knowledge and Learning at the IDB. In this position, he strengthened the role of open knowledge as a key tool for development, generating an ecosystem to leverage the Bank’s knowledge and experiences to increase development in the region.

Between 2007 and 2013, Mr. Basañes was head of the Water and Sanitation Division, a role in which he was responsible for the Bank’s pipeline in water, sanitation and solid waste management; generation and dissemination of sectorial knowledge; management of specific Funds (Spanish Fund for Water and Sanitation in Latin America and the Caribbean, and AquaFund), as well as the relationships with partners in the public and private sectors within the different initiatives (Latin American Water Fund Partnerships, Regional Initiative for Inclusive Recycling) and platforms (HydroBID and AquaRating).

Mr. Basañes is an Argentine citizen, graduated from the Universidad de Buenos Aires. He holds a master's degree and a PhD in Economics, both from the University of Illinois at Urbana-Champaign. In addition, he has a master’s in Public Policy from the Torcuato Di Tella Institute.