Manager, Office of Outreach and Partnerships 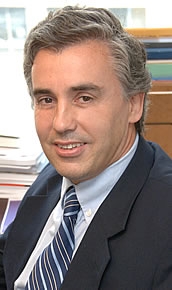 Bernardo Guillamon, an Uruguayan national, is the Bank’s Manager of the Office of Outreach and Partnerships.

Mr. Guillamon has worked at the IDB in the area of private sector development since 1992. From 2007 until July 2008, he was in charge of the Bank's operational program in the Integration and Trade Sector (INT), developing and managing its portfolio of loans and technical assistance grants to expand trade and promote regional integration among all borrowing member countries. INT's portfolio includes innovative investment promotion projects and export development programs, as well as programs for trade facilitation, customs modernization, negotiation and implementation of trade agreements, and local access to global markets. INT projects aim to generate growth and improve employment opportunities throughout the region.

During 2006 and 2007, Mr. Guillamon was the Principal Private Sector Specialist in the Private Sector Coordination Office.  In this capacity, he led the development of the IDB Group’s Integrated Business Plan for Private Sector Operations, and was actively involved in several initiatives to increase the Bank’s lending to new sectors and clients, as well as expand the participation of private companies and sub-national governments in the overall portfolio of the Bank.

Between 2001 and 2006, Mr. Guillamon led the private sector evaluation area of the IDB’s independent Office of Evaluation and Oversight (OVE). Before joining OVE, he was in charge of microfinance, microenterprise and small enterprise development projects for the Andean region, and in that capacity he co-authored the Bank’s Microenterprise Development Strategy. Among the innovations he introduced was the pioneering equity investment of the IDB’s Multilateral Investment Fund in microfinance institutions.

Prior to his career at the Bank, Mr Guillamon worked in agribusiness with small, large and multinational companies. He graduated as an Agricultural Engineer from Uruguay’s Universidad de la República, and he holds an MBA from Santa Clara University in California. He has completed additional graduate courses in business valuation, e-commerce, international trade, and project finance at New York University, Johns Hopkins University, Harvard University and the University of California, Berkeley. He is a member of the Beta Gamma Sigma Honor Society.